There are many things I had forgotten about having little people in your life, such as the dangers that lurk in every corner of your house, their resistance to sleep despite being beyond tired and lastly, their ability to catch bugs, spread it around and bring down households of adults.

I can remember the numerous times one of the children would come home with a cold, upset tums and chickenpox and we knew that the next few days would be spent cleaning up after them and watching, one by one, as the next one came down with it and wondering how long it would be before we got it.  One Christmas there was an outbreak of foot and mouth and relatives came to our front door,  threw the presents at us and ran!

Phoebe caught a sickness bug.  She woke us up in the early hours, with vomit covering every part of her.  Her cot, her covers, her hair, everything was bright orange.  How could one baby produce so much of the stuff?  We cleaned her up, Michael was gagging and I was trying to stop her screams whilst we changed her.  She drifted off to sleep in my arms a few minutes later and we thought that we were home free.  Within seconds she was wriggling, trying to break free.  Michael jumped up and took her.  The next thing, there was more vomit pumping out of her and all over Michael.  We both stood, staring at her and then each other. ‘Well do something!’ he said as he looked down at his dressing gown that was matted up with orange discharge. Long story short, she had a restless night and was so poorly, she had to go to hospital for a few hours due to dehydration.  Her poor Daddy was so stressed out and although, thankfully, it was just a short time, the feeling of helplessness was overwhelming for all of us.  We spend so much time commenting on how big she is getting, it is easy to forget she is still just a little baby.

Fast forward 24 hours and she was back to her normal, mischievious self. Fast forward another 24 hours and she is back at ours as both of her parents have come down with it.  My daughter called me to tell me she was laying on the floor in a dark room and would rather go through childbirth than feel like this.  (I will remind her of this, should the time ever come around). Fast forward 48 hours and Michael and I are both off work and unable to keep anything down.

This morning, we were both laying in bed, feeling completely and utterly sorry for ourselves and I couldn’t help but find humour in the situation. We used to have to look after the children, feed them, bath them and do the daily stuff that needed doing, despite being ill ourselves.  Today we were completely wallowing and wondering which one of us was going to get up and make the necessary dry toast and tea. Michael has yet to make it out of bed.

How on earth did we do it? 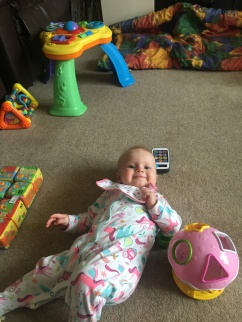 She’s back to her wonderful self